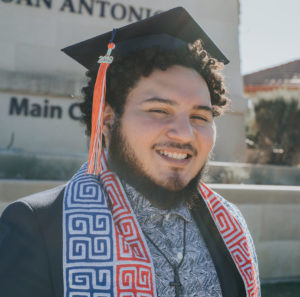 It might not come as a surprise to anyone that while social media is typically a harmless pastime for some, it is also a breeding ground for negativity.

Graduate cyber security student Victor Alejandro, ’19 got the idea to research the topic from his fiancée, who was taking a class in cyber feminism at UTSA. Although he was just an undergraduate at the time, he wanted to learn how to analyze and gather data.

He started his project by talking to Department Chair Nicole Beebe. She put him in touch with doctoral student Eric Bachura to learn about a web scraping tool he developed. Using this tool, he was able to gather data by searching 350,000 tweets from Twitter for specific gender and racial keywords and hashtags.

In addition to learning the technical components, he needed assistance with learning how to formulate a research paper. He partnered with Rohit Valecha, assistant professor of information systems and cyber security, who has a background in social media research.

“Dr. Valecha taught me about the various research tools,” said Alejandro, who plans to pursue his Ph.D. after he graduates next May. “I learned how to use tools like SPSS and STATA. It sparked my interest in machine learning and data science.”

With a passion for learning, Alejandro worked on this project while he was taking classes full time and working. His biggest challenge was finding the time to complete the research.

His research examined toxicity directed toward different racial groups (Whites, Blacks, Hispanics and Asians) and gender groups (men and women) in Twitter as well as how one’s social media structure impacts that toxicity, and how these effects evolve over time. He studied these differences using machine learning to categorize different types of toxic content, including but not limited to obscenity, insult and identity hate.

“People tend to have less toxicity when they have more connections,” said Alejandro, who is a Killeen native. He found that if there was a large group structure in place there was less toxicity.

“Toxicity increases over time,” he said. “It only gets worse, like an epidemic. There is a ripple effect.” In response, Alejandro encourages awareness in how people consume social media.

Valecha and Alejandro have submitted to conference and journal outlets together on this subject.

Recognizing the value of pursuing academic research, Alejandro has taken the skills that he has learned in the classroom as well as independently through this project to advance his professional development.

“This research study opened the door to many opportunities for me,” he said. Alejandro has worked as an intern for IP Secure setting up a Secure Operations Center; he interned with the Air Force Civilian Service on SCADA systems; and he is working this summer as a journeyman fellow with the U.S. Army CCDC Army Research Laboratory.

“At the end of the day you gain a lot of skills that are marketable,” said Alejandro, who is a Cybercorps scholar recipient and a C-SPECC scholar. “I diversified my skillset over the years. I focused on web security, then got interested in digital forensics and now I’m learning about data mining and SCADA systems in the cyber physical space.”

“Victor is very independent,” said Valecha. “I found his work ethic incredible. He is a research master. I’ve been here to help him learn how to write papers and grants.”

Alejandro is currently focused on working with research agencies. He has attended workshops and presentations with research think tanks such as Idaho National Labs, Sandia Labs and Oak Ridge National Laboratories.

Crediting the support that UTSA faculty have given him throughout his time at UTSA, Alejandro is driven to continually learn more.

“As a researcher I have free reign to pursue different projects,” said Alejandro. “I’m passionate about research and want to pursue a career in academic or government research. The access to resources at UTSA is unbelievable.”