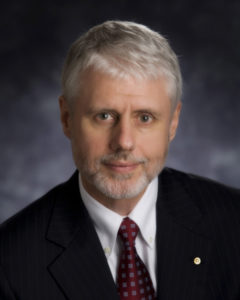 Green joined the Cullen/Frost organization in 1980 and has served in a number of managerial positions within the company’s financial division. Prior to being named president in 2015, he was the chief financial officer for 20 years. He became chairman and CEO in 2016.

During Green’s tenure at Frost, the company has become one of the nation’s 50 largest banks and has increased its common stock dividend for 26 consecutive years. At the same time, Frost has won numerous accolades for excellence and customer service, earning the most Greenwich Excellence Awards for service to business clients among banks nationwide for four consecutive years, and receiving the highest ranking in customer satisfaction in Texas in the J.D. Power U.S. Retail Banking Satisfaction Study for 11 consecutive years.

Green currently serves on the Federal Reserve Board’s Federal Advisory Council, serving the Fed’s 11th District. He also serves on the Board of Directors and Finance Committee of the Southwest Research Institute and on the University of Texas at Austin Chancellor’s Council Executive Committee, McCombs School of Business Advisory Council and the McCombs Scholars Program committee. Green recently joined the UTSA Campaign Leadership Council.

As a member of the Board of Directors of The Tobin Center for the Performing Arts, Green serves as board treasurer and as the chairman of the Finance Committee. Green is also a member of the Executive Committee and Board of Trustees of the United Way of San Antonio and Bexar County.

Green graduated with honors from the University of Texas at Austin, earning a bachelor’s degree in accounting. Prior to joining Frost, he spent three years in public accounting.

The Frost Distinguished Lecture Series brings prominent business and community leaders to UTSA to share their knowledge and experiences with students and others in the university and business community. The lecture series, which began in 1988, presents a forum for business leaders and academics to share their experiences in business so that students can broaden their understanding of the business world and the individuals who lead it.