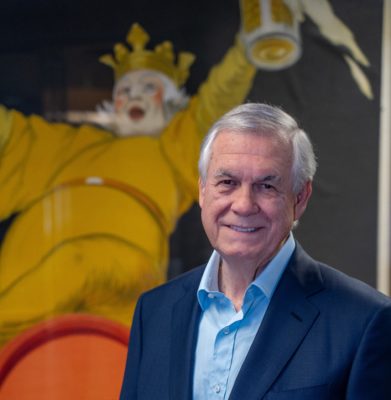 Carlos Alvarez, founder of The Gambrinus Company, will present the keynote address during the Frost Distinguished Lecture Series in the Carlos Alvarez College of Business at UTSA. The lecture begins at 11:30 a.m. on Thursday, Sept. 22 in the Business Building Liu Auditorium (BB 2.01.02). The event is free and open to the public.

Alvarez founded Gambrinus in 1986 after moving from Mexico to San Antonio. His family-owned company became the U.S. importer for the Grupo Modelo beer brands and for the next 20 years was responsible for selling and marketing one of the most successful brands in contemporary beer history—Corona Extra.

Taking an interest in a local brand, he acquired the Spoetzl Brewery in 1989 and turned it into a leading independent craft brewery with Shiner Bock as its flagship brand. Gambrinus also owns and operates the Trumer Brewery in Berkeley, California.

A prominent community leader, Alvarez is a co-chair of UTSA’s Campaign Leadership Council; serves on the boards of Cullen/Frost Bankers Inc., United Way of San Antonio, and the World Affairs Council of San Antonio; and is a member of Haven for Hope’s Leadership Advisory Council.

At the national level, he serves on the boards of National Public Radio and the World Affairs Council of America, both in Washington, D.C. He is a trustee of Davidson College in Davidson, North Carolina and a member of The University of Texas System’s Chancellor’s Council.

Recognized as a legendary Texas businessman, Alvarez was inducted into the Texas Business Hall of Fame in 2010. In 2011, he received the Ellis Island Medal of Honor, which celebrates inspiring immigrants whose philanthropic works better their communities.

Alvarez received a bachelor’s degree in biochemical engineering from the Monterrey Institute of Technology and an honorary doctorate from St. Mary’s University.

In March 2021, Carlos and Malú Alvarez made a $20 million transformational gift to the UTSA College of Business. In recognition of the significance of this gift, the college was renamed the Carlos Alvarez College of Business, making if the first named college at UTSA.

The Frost Distinguished Lecture Series brings prominent business and community leaders to UTSA to share their knowledge and experiences with students and others in the university and business community. The lecture series, which began in 1988, presents a forum for business leaders and academics to share their experiences in business so that students can broaden their understanding of the business world and the individuals who lead it.