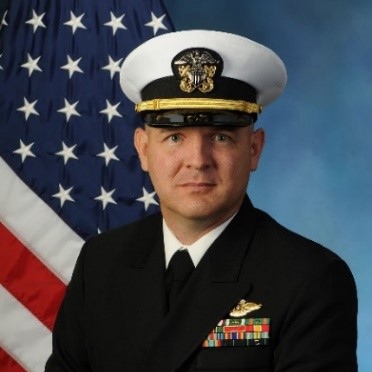 Tyler J. Towers was born and raised in Salt Lake City, Utah.  He entered the United States Navy in December, 2001 through the Health Services Collegiate Program (HSCP). At that time, he was enrolled in the Master of Health Administration program at the University of Memphis.  Upon completion of his MHA in 2003, he was commissioned a Lieutenant (Junior Grade) in the Navy Medical Service Corps and attended Officer Indoctrination School (OIS) in Newport, Rhode Island.

Following OIS, Towers reported to Naval Hospital Beaufort, South Carolina, where he served in various administrative roles in the operating management, manpower, and patient administration departments. In November, 2005, he reported for duty at Naval Healthcare New England (NHCNE) in Newport, Rhode Island, where he again occupied various leadership roles within the administration directorate. During his tenure at NHCNE, he deployed to Kuwait in support of Operation Iraqi Freedom.  Early in the deployment, he played an instrumental role in the formation and leadership of Medical Task Force Kuwait, a joint Army-Navy medical command with a presence in Kuwait, Qatar, and Djibouti.

Upon completion of this deployment, Towers finished his tour at NHCNE and accepted orders to serve as the operations officer for 1st Dental Battalion (1st Marine Logistics Group), Camp Pendleton, California. In this capacity, he earned designation as a Fleet Marine Force Qualified Officer and assisted in the training and qualification of many other Naval officers within 1st Marine Logistics Group. He was also awarded the Navy and Marine Association Leadership Award in 2009 by the Commanding General, I Marine Expeditionary Force.

In September, 2009, Towers was selected for Duty Under Instruction, which allowed him to earn a Doctorate in Health Policy and Administration in the civilian sector while remaining on active duty. He commenced his doctoral training at the Pennsylvania State University in August, 2010, and completed the program in May, 2013.

Towers reported to the Bureau of Medicine and Surgery for his first follow-on tour in August, 2013, where he served as a strategy analyst supporting the Executive Director and, concurrently, as a research fellow at the Center for Naval Analyses (CNA). Following this assignment, he joined the faculty at the top-ranked Army-Baylor University Graduate Program in Health and Business Administration in August 2017 where, in addition to his teaching responsibilities, he led and advised all Navy and Coast Guard officers flowing through the program.

Beyond his primary duties and obligations, Towers devotes a substantial portion of his time to teaching and training healthcare providers and administrators around the world. Since 2014, he has served as a volunteer instructor with the Defense Institute for Medical Operations (DIMO), completing two separate missions to Pristina, Kosovo in 2015 and 2017, and leading a mission to Maputo, Mozambique in 2019. He began serving as course director for the in-residence Executive Healthcare Resource Management Course in 2019. In addition to his activities with DIMO, Towers was competitively selected for the prestigious Fulbright Specialist Program in June 2017. The Fulbright Specialist Program is a U.S. Department of State initiative that pairs highly qualified academics and professionals with host institutions abroad to share their expertise, strengthen institutional linkages, hone their skills, gain international experience, and learn about other cultures while building capacity at their overseas host institutions.