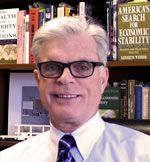 Ken Weiher is an associate professor emeritus of economics and served as chair of the Department of Economics from 2002-2014. He joined the UTSA faculty in 1975 after completing his Ph.D. in economics at Indiana University. Prior to that, Dr. Weiher received his bachelors of arts in economics from the College of William and Mary. He retired in 2019.

Dr. Weiher’s primary area of research is U.S. economic history. His early publications concentrated on the economics of southern urbanization. Later work focused on macroeconomic topics such as the Great Depression, government macroeconomic policies and the historical patterns of the movements in interest rates, stock prices and gold prices. He has authored two books–one a macroeconomics textbook and the other a historical study of monetary and fiscal policies in the twentieth century. Dr. Weiher served as the president of the Economic and Business Historical Society from 2003-04.