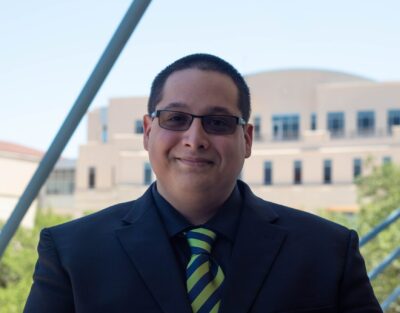 After almost eight years of working on his degree and beginning at a community college, cyber security transfer student Christopher Placencio is ready to finish his degree at the Carlos Alvarez College of Business at UTSA.

Transferring from one institution to another is never easy, especially taking the leap during a pandemic. Placencio originally came to Roadrunner nation to complete a computer science degree, but plans soon changed, and he chose the college’s B.B.A. in cyber security program.

Not only has Christopher proved himself as an academic, but he has also immersed himself into student life with involvement in several clubs. Currently, he is treasurer of the Association for Computing and Machinery (ACM). “I believe in ACM because it represents all forms of technology, and even if you’re not a technology student, you can still find your place there,” he said.

He is also vice president in the National Society for Leadership and Success and is an active member of the Poetry Society. Club involvement only scratches the surface of Placencio’s involvement at UTSA. He volunteers in UTSA’s Security Operations Center, where he aids cyber experts in virtually protecting students and faculty as a Tier I Analyst.

“It is pretty wicked seeing everything that happens and having the ability to help try and fix the issues that may affect campus life,” he said. Aside from his current position, he also gained professional experience this past summer working as an IT intern for the Independent Rough Terrain Center. In this role he not only learned the ins and outs of information technology, but also the role that information technology plays within a smaller company’s work environment. “Technology is integral in how a company survives, large or small,” he said.

Amidst the demands of classes and exams, he spends his free time reading his large collection of fantasy and sci-fi books and working on his creative writing. “Reading other people’s perspectives is great, but developing your own sense of perspective is paramount. It adds to the sense of imagination,” he said.

Faced with the challenges of transferring to UTSA during a pandemic and changing his major, Placencio is now motivated more than ever. Seeing the light at the end of the tunnel, he is prepared to graduate at all costs. “At the end of the day, the fact that I can get that piece of paper and additional certifications is important to me. I earned this degree,” he stated.

Thinking ahead after graduation, his overall goal is to obtain a security analyst position in a security operations center. Describing himself as a solitary guy he jokingly stated, “I don’t plan on having a family of my own, I choose to live the good life with technology before I turn myself into a robot!” Following a childhood dream, he also plans to put his creative writing skills to the test and write a book.

As a soon-to-be graduate who has been through it all, Placencio gave this word of advice to present and future transfer students like himself. “Just be confident in yourself. If you have a dream, keep it, own it and improve upon it. Take the steps to be who you want to be. At the end of the day, the only person that can hold you back is yourself.”