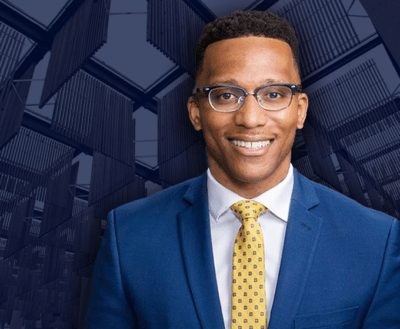 Christian Menefee, ’10 is breaking barriers in the Texas public service sector. An alumnus of the College of Business, Menefee has taken the reins as the newest Harris County attorney, making him the youngest at 32 years old and the first African American in the seat.

From his time at UTSA through his start as a lawyer, Menefee discussed his new role and the journey he has had since becoming the new Harris County attorney.

First, congratulations on your new position with Harris County.

Thank you. I really appreciate it. I am excited about this new role.

I know you just started, but what does it mean for you to be in a position like this, not only in an area you grew up in but as the youngest person and the first African American?

It is part of a trend that is going on in Harris County. My election, along with that of our county judge, Lina Hidalgo, who’s a young Latina, and our interim county clerk, Chris Hollins, who’s only 34, is showing a new leadership here in Harris County.

Breaking this barrier shows an opportunity for change in how we do governance in Harris County. I’m hoping to bring a new perspective—a diverse perspective. I want to take on the important challenges that we face. But to me, being the first black Harris County attorney and the youngest means showing a pathway to a better future for our county.

Why Harris County attorney? Why was this a position that you sought?

I ran for this position in part because I love practicing law. When I was growing up, the first lawyer I ever met was in college. During my upbringing, I was not exposed to folks who practiced law, so it was a big deal for me. When I got in and started practicing at these law firms, I just loved it.

But I also found that I love social policy. I love using the law and using existing structures to try to make changes for everyday people. And this office is the perfect intersection of the law and social policy. I view it as an office that is responsible for helping the collective good of Harris County residents.

What are some goals you have as the new county attorney?

Our focuses thus far have been environmental work. This county is home to the energy capital of the world and with that naturally comes pollution and violations of environmental laws. One of the things we’re working to do is build up a robust environmental team, which can work permits, be involved in the conversation about fighting against serial violators of environmental laws, but also prevent the next major explosion.

We’re also working to build a consumer protection practice during the pandemic. Even before the pandemic, scams and frauds were big in any city, but they’re especially big in the Houston area. We want to build out a group of lawyers that goes after fraudulent businesses, and either gets them to pay fines or shuts them down when they break their social contract with the residents of Harris County.

I know we’ve been talking a little bit about your new position, but can you take me back to your time at UTSA.

I went from public schools out here in Harris County to UTSA, where I arrived in the fall of 2006. During my time there I was vice president of the student body and president of my fraternity. I’m a firm believer that in college you learn how to think critically and how to deal with others. From there, I went off to study law at Washington University School of Law in St. Louis. I knew that public service was going to be the final goal one day, so I split between a law firm and a government agency.

I had the pleasure of going to one of the top trial law firms in the state and learn from some of the best lawyers that one can learn from and worked on a bunch of complex issues. At the same time I was spending my nights and weekends being incredibly involved in the community, trying to fight for the social change that I wanted to see.

Did you know that you always wanted to go back to the Houston area to practice law?

I didn’t. When I was first applying to law school, I thought there was a chance that I might want to work on the East Coast. And so that was part of the reason why I went to law school in St. Louis so that I have an opening to the East Coast. I spent my first summer working in New York and decided that it wasn’t for me. I wanted to come back to Texas, so I did that during my second summer in law school, and I’ve been here ever since.

What is the thing you’re most proud of in your career?

Learning to be a professional. I’m from a military family and nobody in my family went to college until I did—and certainly, nobody had been a lawyer. It was a bit of a transition for me. I’ve only ever had two jobs in my life: a lawyer and cashier at H-E-B. So it was a major transition for me to go into the professional world and to learn how to conduct myself as a professional and learn about ethics and integrity. I’ve always been very proud of making that transition, while also staying true to my working-class background and my desire to work hard for others and to serve others.

Is there anything you’d like to say to the UTSA students, specifically the Black and Latino students, who have these big dreams after graduation?

The sky’s the limit. One of the things that I felt in my youth was when you go into a room of power and you look around and you don’t see anyone who looks like you. You start to develop imposter syndrome, or you feel like maybe you’re not qualified enough to be there. My advice is you are undisputedly qualified to be there. You are good enough. You’re talented enough. And when you get in there, you’re going to blow minds. And don’t for a second think that you don’t belong in that room, because you do.