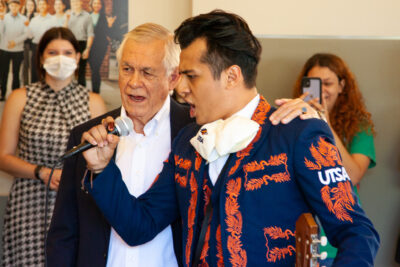 College benefactors Carlos and Malú Alvarez were honored during a celebration Sept. 22 for their historical $20 million gift to the UTSA business college that resulted in the naming of the Carlos Alvarez College of Business—the first named college at UTSA.

Greeted by UTSA student ensemble Mariachi Los Paisanos, Carlos Alvarez performed a song with the group before the official ceremony began.  In front of an overflowing crowd of students, faculty and business community leaders, UTSA President Taylor Eighmy thanked the Alvarez family for their longstanding generosity to UTSA.

“This gift is deeply, deeply important to the trajectory of the university and is profoundly impactful in advancing our student success efforts,” said Eighmy. “Even more, because of your generosity, we’ve been able to establish the $1 million Alvarez Research Challenge.”

Eighmy recognized benefactors Ann and Charlie Deacon, Walter Embrey, Lou Celia and Don Frost and Nancy and Frank Kudla for their gifts in support of this challenge.

Jonathon Halbesleben, dean of the Carlos Alvarez College of Business, spoke about the impact that the Alvarez gift has had on the college.  Due to their support, the college has launched the Alvarez Fellows Undergraduate Research Program to support experiential research opportunities for students; fund faculty mentors to support students in this program; and promote faculty research excellence. 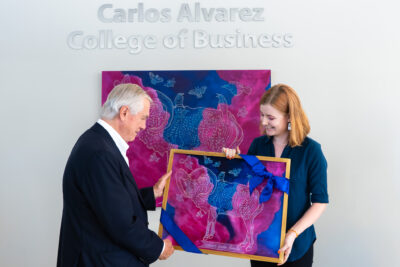 “Thank you Carlos and Malu for believing in us and making the investment to help transform our business students into business leaders,” said Halbesleben, the Bodenstedt Chair and Tom C. Frost Distinguished University Chair for Business Excellence.

“Amor para familia,” an original piece of artwork by Richard Armendariz, professor of art at UTSA, was unveiled as part of a tribute wall honoring Carlos Alvarez.  The vibrantly-colored piece depicts a ram on canvas and represents the family’s strength, tenacity and success.

Upon viewing the piece, Carlos Alvarez exclaimed, “This is NOT a ram, it is a G.O.A.T.—greatest of all time.”

Recognizing this as a defining moment in UTSA’s history, Student Government Association President Jasmin Paquet-Durand Ford presented Carlos Alvarez with a framed picture of the artwork.

“On behalf of all students, thank you,” said Paquet-Durand Ford, a junior economics major in the college. “To have our college named after someone as successful, entrepreneurial and philanthropic as you is truly an honor. You are an inspiration, and I thank you for believing in UTSA and in our students.”

Carlos Alvarez’ is the founder of The Gambrinus Company, which became the U.S. importer for the Grupo Modelo beer brands. For the next 20 years, Gambrinus was responsible for selling and marketing what would become the most successful brand in contemporary beer marketing history—Corona Extra. 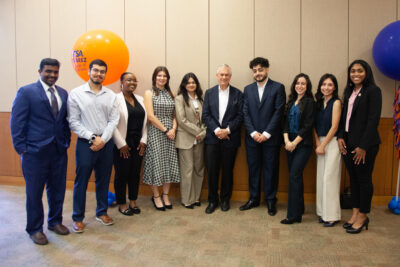 In 1989, Alvarez acquired the Spoetzl Brewery in Shiner, Texas. At that time, the historic Texas brewery had been in decline for several years and faced serious financial difficulties. Having seen Austin’s developing consumer support for Shiner and recognizing the brewery’s heritage which dates back to 1909, he became convinced of the brand’s potential. After investing in the brewery’s facilities and in selling and marketing efforts behind its beers, today Shiner is a leading independent craft brewery in the U.S. with Shiner Bock as its flagship brand.  Gambrinus also owns and operates the Trumer Brewery in Berkeley, California.

A prominent community leader, Alvarez serves on the boards of Cullen/Frost Bankers Inc.; United Way of San Antonio; the World Affairs Council of San Antonio; and is a member of Haven for Hope’s Leadership Advisory Council. At the national level, he serves on the boards of National Public Radio and the World Affairs Council of America, both in Washington, D.C.